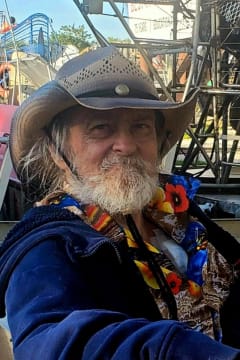 David passed away in early morning on July 7th, 2021. He was born on April, 1st 1961 in Grafton, WV. He was preceded in death by his wife and love of his life, Janet Fairley and daughter Chrystal Hose. David is survived by his mother Betty McFarland of WV, brother Brian Fairley of WV and 3 Sons: David Fairley Jr. of Florida, Alan Fairley Sr. of Ohio and Max Fairley (Stephanie) of Florida. He was a loving grandfather to 6 grandchildren: Mackenzie 17, Ella 10, Alan Jr. 7, CarLee 19, Hannah 15, and Joseph 13. Services to be held in Grafton, WV at a later date yet to be determined.

Poem for “The Old Man”

This man that left the world today- I called him “Old Man”
He was a big dreamer though his dreams often lacked a plan
He was lighthearted and always full of silly jokes
He had a sparkle about him I could see it every time he spoke
He was a father, grandfather, brother, husband and son
And he aimed to please just about everyone
If he was suffering, I doubt you would even know
He hid behind his jokes and always kept up a great show.
He always had stories, some of them might have even been true
I just went along with it, it just seemed like the right thing to do.
He tried to protect his children and pretend everything was okay
Even when he feared he wouldn’t live another day
He loved unconditionally even those who had done him wrong
And he lost himself completely once the love of his life had gone
He talked with me often about missing his brother
About feeling he never lived up to the expectations of his mother
He just wanted to feel important and make his family proud
He disserves to have credit for being a dad that stuck around
I hope everyone remembers him for the man he wanted to be
As the big hearted loving father that I have always seen
His ornery little giggle and the genuine excitement in his face
Is forever etched in my memory and will never be erased.

Click a candle below to add a candle to your message.